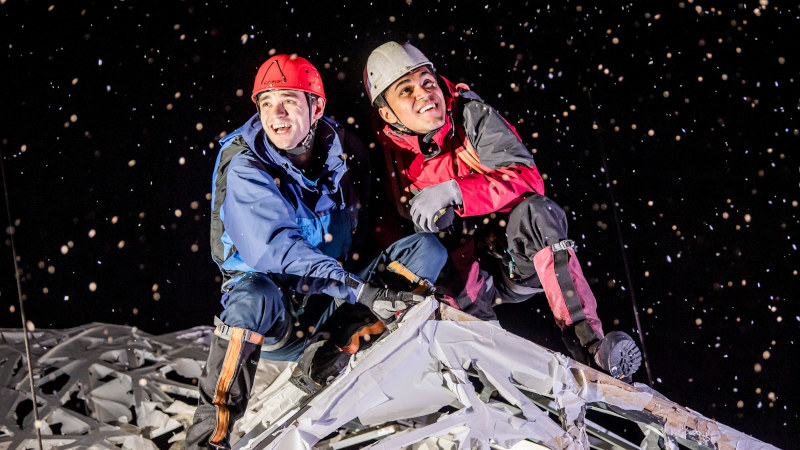 London/Hampshire – Wednesday 20th July 2022 – Distributor Woodcut International has extended its reach into live theatrical filmed productions in partnership with one of the UK’s most renowned and celebrated theatres, Bristol Old Vic.

Tom Morris, Artistic Director, Bristol Old  Vic said: “During the COVID closures we were able to develop the technique and technology to broadcast live theatre from our unique and atmospheric playhouse.   Now we have edited and post-produced these films to preserve the frisson of live performance and are taking them to a global marketplace so that the unique combination of ground-breaking performance and pure theatrical atmosphere which has built Bristol Old Vic’s national and international reputation can be experienced all over the world. We thrilled to be launching this partnership with Woodcut International to achieve this.”

Based on Joe Simpson’s bestselling memoir, Touching the Void charts an astonishing feat of human endurance. Following a sold-out world premiere in Bristol and critically acclaimed West End run, the gripping performance transports viewers to the Peruvian Andes where Joe Simpson and Simon Yates embark on the perilous descent of the Siula Grande which soon becomes a breath-taking struggle for survival.  Perched on an unstable snow-cliff and battered by freezing winds, Simon is desperate to rescue his injured climbing partner who hangs from a rope below him. Meanwhile, Joe teeters on the brink of death and despair in a crevasse from which he can’t possibly climb to safety. Life-affirming and often darkly funny, Touching the Void takes the audience on an epic adventure that asks how far you’d go to survive.  Touching the Void is a Bristol Old Vic, Fiery Angel, Royal Lyceum Theatre Edinburgh, Royal & Derngate Northampton and Fuel co-production.

Following its 5-star world premiere, Emma Rice’s sensational adaptation of the Brontë classic Wuthering Heights returns.  Rescued from the Liverpool docks as a child, Heathcliff is adopted by the Earnshaws and taken to live at Wuthering Heights. He finds a kindred spirit in Catherine Earnshaw and a fierce love ignites. When forced apart, a brutal chain of events is unleashed. Shot through with music, dance, passion and hope, Emma Rice (Romantics Anonymous, Brief Encounter) transforms Emily Brontë’s masterpiece into a uniquely theatrical experience and intoxicating revenge tragedy for our time.  Wuthering Heights is A National Theatre, Wise Children, Bristol Old Vic and York Theatre Royal co-production.

Woodcut International has also finalised a deal with US premier streaming service BroadwayHD who acquired Touching the Void (streaming on the platform as of 16th June) and Wuthering Heights.  The deal was brokered by Diane Tripp who handles Woodcut International sales to North America, LatAm, Scandi and CEE.

Stewart F. Lane and Bonnie Comley, co-founders of BroadwayHD said: “We are thrilled to partner with Woodcut International to extend BroadwayHD’s world-class theatre titles to a global audience.  It’s an honor to expand the reach of these extraordinary live performances from beyond Broadway, to audiences around the world.”

Koulla Anastasi, Commercial Director, Woodcut International said: “These are extraordinary plays and we are privileged to be working with such an acclaimed theatrical institution as Bristol Old Vic.  The performances have been uniquely packaged for a global TV audience, transporting viewers into the auditorium.  We are also absolutely delighted to have signed a deal with BroadwayHD, a premium on-demand platform that streams high-end stage plays and musicals.”

Established in 1766, Bristol Old Vic is the oldest working theatre in the English-speaking world, and has launched the careers of many renowned actors – from 18th Century Sarah Siddons through to Peter O’Toole, Kwame Kwei Armah, Olivia Coleman, Miranda Richardson, Daniel Day Lewis, Patrick Stewart, Jeremy Irons, to name a few.   Celebrated by David Garrick as “the most exquisitely designed theatre in Europe,” Bristol Old Vic has rebuilt its brand with transfers to London and world tours including, Jane Eyre, Peter Pan, A Midsummer Night’s Dream and Swallows & Amazons, and is recognised as one of the most exciting, inclusive places to experience world-class theatre.   Bristol Old Vic now has opened its doors to film crews where cameras follow the action on the stage as well as in the audience, capturing a unique experience that can be shared with global audience.

BroadwayHD, founded in 2015 by Tony Award®-winning producers Stewart F. Lane and Bonnie Comley, is the premier streaming service offering premium full-length stage plays and musicals captured specifically for multi-platform viewing to theatre fans across the globe. In addition to exclusive live-streamed content of the world’s best productions, Broadway offers subscribers unlimited on-demand access to a library of more than 300 theatre productions from Broadway, the West End and beyond including Patrick Stewart in ‘Macbeth,’ Hannah Waddingham in ‘Into The Woods,’ Matt Henry in ‘Kinky Boots,’ and Ruthie Henshall in ‘Godspell:  50th Anniversary Concert.’ If You Can’t Get to Broadway, Get to BroadwayHD.

Established in September 2020, UK based Woodcut International is the distribution division of Woodcut Media, a leading producer of a broad range of factual programming that includes True Crime, specialist factual, premium factual and factual entertainment. Woodcut International focuses on the global sales of select Woodcut Media series and specials that include new productions and library titles such as A Royal Guide To, (K)nox: The Rob Knox Story, Forgotten War Stories, The Killer Within, the Idris Elba led docs (Cut from a Different Cloth, Mandela, My Dad and Me), and Fukushima: Nature in the Danger Zone, to name a few. www.woodcutinternational.com